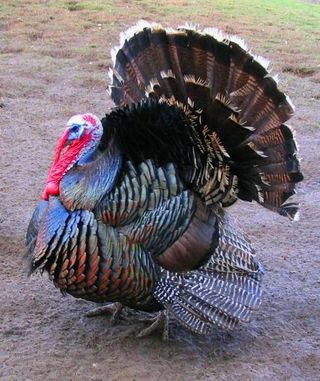 I love watching the turkeys on Martha’s Vineyard. They travel in small family groups of two parents with chicks and adolescents, coalescing into larger tribes.

When it rains, wild turkeys go about their business, pecking at food – I’ve yet to see one raise it’s mouth and drown. And they have feelings. My daughter and I once watched as 4 turkeys stood around a comrade who’d just been run over, clearly distraught. None left, even as cars went by.

I saw a family of 7 perched on a branch in size order, crapping in unison. And one early morning I turned a corner and faced a lawn of turkeys. I froze and counted them – 42 – a little afraid, because the hens are quite enormous. They turned and stared as I quietly backed away.

Like humans, a few individuals can become deranged. On Father’s Day in 2008, for example, a "hostile, feral turkey" chased two cops onto their patrol car. A man who had raised the unfortunate Tom tried to help his pet when the officers shot and killed the terrorist turkey. Later, neighbors and a UPS delivery person corroborated the police view that Tom was indeed violent, and there was much concern that the “sociopath with feathers” had transmitted his errant behavioral genes to the next generation.

For the most part, the turkeys of Martha’s Vineyard are oblivious to gaping humans and the occasional yapping canine. Maybe that’s because the island’s somewhat limited biodiversity offers no natural predators, just a human population that surges in the summer with many folk who aren’t used to sharing space with large, wild birds.

I haven’t checked the DNA of the turkeys of Martha’s Vineyard, but I’d bet their immune systems are a lot tougher than those of the barnyard variety. Instead of the ginormous “breasts” (why do we speak of breasts in birds, who do not lactate?) that cause the broad-breasted “industrial” white turkey to topple over, these wild turkeys have more dark meat (more myoglobin), which enables them to suddenly soar up into the treetops at a clap of thunder, and to have flown to the island in the first place, reaching speeds, according to PETA, of 55 mph.

Having followed the turkeys of Martha’s Vineyard for years, and not particularly liking to eat their brethren, I thought I’d compile a listicle of a dozen facts about the genetics of Meleagris gallopavo.

1. The domesticated turkey originated in Mexico in about 800 BC. Their races, like races in humans, are defined by a superficial characteristic – plumage color – rather than full gene-based ancestry. Only a half dozen or so of the turkey’s 16,000 genes contribute to plumage color, just like a handful of our 20,000 genes impart skin color. All commercial lines descend from one ancestral group, although the American Poultry Association recognizes 7 breeds.

2. Like human chromosomes, turkey chromosomes were initially described rather vaguely. A 1931 paper describes 4 big J-shaped chromosomes, 2 big rods, 3 short rods, and 29 globes. Today we know the genome is splayed out over 39 pairs of autosomes. Like all birds, males have two Z chromosomes and females one Z and one W, somewhat the opposite of humans, in whom females are the homogametic sex (XX).

3. The turkey genome project began at Virginia Tech in 2008, and the genome sequence, of a hen named Nici, was published in 2010. Nici means “Nicholas inbred,” after famed turkey farmer George Nicholas who, at Nicholas Turkey Breeding Farms in Sonoma, California, turned the wild bird into today’s barely recognizable top-heavy product of extreme artificial selection. Conventional agriculture fosters far more profound change than the one-gene-at-a-time tweaking of GMOs that many people find so horrifying.

4. Nici was the spawn of 9 generations of full-sib matings. The brother-sister sex left just enough heterozygosity to provide interesting gene variants, but not enough diversity to gum up the DNA sequencers and assemblers. Having the turkey genome sequence will enable breeders to select traits based on genotype rather than phenotype, which can theoretically help to preserve some of the valuable traits hidden in the recessive state.

5. The turkey genome is 1.1 billion bases. Unlike the rush to sequence the human genome, with the turkey interest is more on annotation – figuring out what genes do and how that can make farmers money – than in accumulating sequences from different individuals.

6. The turkey was the fifth farm animal to have its genome done, following the pig, cow, sheep, and chicken. The duck was done in 2013.

7. The turkey genome is similar to that of the chicken, differing by some two dozen inverted chromosomes. The turkey's sequence is being used to fill in gaps in the chicken sequence, although at 1.8 variants (SNPs) per kilobase, turkeys have a less diverse genome than chickens, which have 5.5. The reason: the ancestral chicken population was much larger than the ancestral turkey population. The turkey genome has five regions of exceptional genetic uniformity, and the mitochondrial genome is also much less diverse.

8. An autosomal recessive condition of turkeys is red blood cells that have two nuclei.

9. Turkeys have superb vision. With five types of the visual pigment rhodopsin, 7 types of photoreceptors, and 4 types of cones, they can see into the ultraviolet. We can’t. They also have a mysterious T cell receptor apparently unique to them.

10. Industrial turkeys are more likely to suffer from non-inherited diseases than inherited ones. The list is long. Being smashed into close quarters can trigger feather picking (auto and allo), stampeding, and a hardness of the underfoot called bumblefoot. Poor nutrition can soften bones and enlarge hocks. Poisons include milkweed and aflatoxin.

Turkeys can give us Newcastle disease (viral; respiratory), Chlamydia psittaci (bacterial; respiratory), tuberculosis, and typhoid. They also get a host of fungal conditions (thrush, brain, skin, lungs), protozoan woes (blackhead), more viral (flu, bluecomb, tumors) and bacterial infections (erysipelas, cholera, pox, and a malodorous infection of the navel), gross worms (redworm, flukes, round worms, tapeworms) and of course lice, ticks, and mites. Highly selective breeding teamed with overuse of antibiotics has pummeled their immune systems. Industrialized turkeys are particularly susceptible to
aflatoxin poisoning, from fungus growing on feed corn. Aflatoxin causes liver cancer in humans. Wild turkeys have a gene variant (glutathione s-transferase) that detoxes aflatoxin, but it has been bred out of their domesticated relatives.

Meleagris gallopavo is a beautiful animal. No wonder Ben Franklin wanted the turkey to be the national bird.