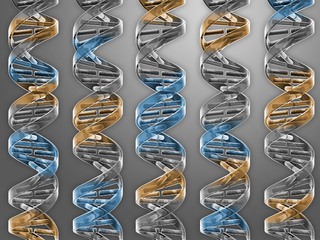 Is a synthetic genome new life?
J. Craig Venter and his colleagues at Synthetic Genomics Inc update their efforts to create a “hypothetical minimal genome" in Science.

“JCVI-syn3.0,” or syn3.0 for short, is about 531,000 DNA base pairs organized into 473 genes, serially transplanted into cells of the tiny and fast-replicating Mycoplasma mycoides and M. capricolum. The first iteration of the smallest synthetic genome, JVCI-syn1.0, has just over a million base pairs, and the intermediate JCVI-syn2.0 has 576,000.

While syn3.0 will serve as a foundation for future synthetic biology, it reminds me of two favorite experiments from more than half a century ago.

Ingram’s Sickle Cell Experiment
The researchers created syn3.0 in steps that they call “design-build-test”. First they synthesized 8 genome pieces based on an extensive literature review of genes thought to be essential, and mass-produced the pieces in yeast cells. Then they placed the pieces, one at a time, into M. mycoides carrying the other seven-eighths of syn1.0. They transferred the reconstituted genome into M. capricolum, a step that jettisons the host genome, then deployed naturally-occurring mobile genetic elements (transposons) to insert into and thereby destroy one gene at a time.

If a cell can’t survive with a specific gene harpooned, then that gene is deemed essential -- initially. Genes are classified as essential, not essential, or quasi-essential, these last being required for the organism to grow well enough to study, but not to live.

The “design-build-test” strategy reminds me of Vernon Ingram’s brilliant shortcut to discover the molecular basis of sickle cell disease.

Rather than determining the sequence of all 146 amino acids that make up beta globin, painstaking in 1958, Ingram cut the protein into peptides, then ran the pieces in an electrical field (electrophoresis). One peptide moved to a different position in people with sickle cell disease; carriers had corresponding fragments that migrated to the disease position as well as to the normal position. Ingram then deduced which piece included the single-base mutation that causes the disease – he had only to decipher the 8 amino acids of that fragment.

Getting Rid of Redundancies
Syn3.0 is essentially syn1.0 minus 42 genes. Part of the reduction came from eliminating syn1.0 genes that are initially classified as essential but are actually redundant – they aren't needed if another gene is also present, but this wasn't obvious until their partners were deleted. Looking at genomes piece-by-piece can miss the redundancy and dual dependence, and may have contributed to initial overestimates of essential genes in many genome projects.

The result of the whittling, syn3.0, is “a working approximation to a minimal cell.” But that cell with its adopted genome may be somewhat coddled, given all the small molecules it could possibly require in the laboratory, compared to its natural niche as a goat pathogen. In the real world, with environmental constraints and challenges, genomes are larger than the hypothetical minimum. In fact the researchers chose Mycoplasma because their hosts supply nearly all nutrients, enabling them to naturally survive with minimal genomes.

So which genes does syn3.0 use? Nearly half take care of protein synthesis (transcription and translation) or “preservation of genome information” (DNA replication, topology, repair, metabolism and cell division). The rest are involved in cell membrane structure and function and controlling the composition of the cytoplasm. Most important was that the functions of 31.5% of the genes – 149 of 473 – aren’t known. Many, however, are highly conserved (found in other organisms), suggesting that they are essential. "Knowing we’re missing a third of our fundamental knowledge is a key finding even if syn3.0 has no other uses," Dr. Venter said.

The Miller Experiment
Why design-build-test synthetic genomes? The strategy may be used someday to design drugs or industrial chemicals. But I think the entire field of synthetic biology tackles the question that draws many of us to biology – what, exactly, is a living organism?

For as long as I can remember, I’ve wondered what life is and how it differs from, say, a rock. This fascination led to me bringing home all sorts of creatures, dead and alive, from my adventures in the wilds of Brooklyn. I’ll never forget my mother bursting into the office of a paleontologist at the American Museum of Natural History asking him to identify the precious fossils that I kept in a shoebox – and still have. That I would become a biologist seemed evident from earliest childhood, a trajectory that narrowed to genetics once I realized that DNA directs everything.

In college, my interest went from collecting, comparing, and observing to experimenting. In cell biology lab, we recreated the classic 1953 Miller experiment.

Stanley Miller was a 23-year-old graduate student in biochemistry when he combined components of a possible prebiotic atmosphere – methane, ammonia, hydrogen, and water – in a glass vessel and added a spark. The result, after many variations on the primordial soup theme: amino acids. He'd brewed an organic molecule of life from simple chemical compounds in the environment, given a jolt. Miller’s adviser Harold Urey took his name off the paper they submitted to Science so that the young man would receive the credit.

Headlines proclaimed that Mr. Miller had created life, as they did about syn3.0. “People made jokes. They suggested that I’d grown a rat or a mouse in there!” he told me. (My husband in fact stuck a frog into a friend's Miller experiment re-enactment in a lab class.) Dr. Miller died in 2007; I interviewed him in 2001.

When the first edition was published in 1994, sequencing "the" human genome was just getting underway. A table listed genome sizes, the smallest, E. coli, at about 4.8 million base pairs. By edition 2 in 1997, the table included Haemophilus influenzae at the low end, with 1.8 million base pairs. Edition 3, from 1999, began with Mycoplasma genitalium, “the smallest known genome of any free-living organism”. Its streamlined 582,970 base pair genome would inspire Dr. Venter to begin deriving the first synthetic genome a decade later.

Edition 4, published in 2001, arrived shortly after the official debut of the first draft human genome sequence, announced with much fanfare at the White House. I’d learned the carefully orchestrated news months earlier, while doing the final edits. But because having a human genome sequence or two gracing the covers of Science and Nature didn’t mean we understood anything about what’s actually in those genomes, my textbook still had room for non-humans. I expanded the table of genomes.

I wrote a new section called “The Minimum Set of Genes Required for Life,” giving Mycoplasma genitalium its own table. Of the 480 genes, Dr. Venter estimated that 265 to 350 were essential to life. Then in edition 5 I gave the minimal genome it’s own boxed reading treatment. In the midst of all the human genome news, I remained more interested in the simplest sets of genetic instructions, for that is where understanding lies.

As more human genome sequences rolled in – James Watson, Craig Venter, then a series of ethnic “firsts” followed by celebrities, curious researchers, and journalists – my textbook, because it has “human” in the title, shrank coverage of other species. Like natural selection, instructors dictate what stays and goes in a textbook. But I kept the littlest genome, adding in edition 6, (2005) “Taking cues from the tiny Mycoplasma genome, Venter’s current research group is attempting to build a synthetic genome …”

Finally in 2010, edition 10, came Mycoplasma mycoides JCVI-syn1.0: “Creation of a Bacterial Cell Controlled by a Chemically Synthesized Genome".” The researchers even stitched their names like watermarks into the reconstituted 1,077,947 base pair genome using a lexicon of DNA triplets corresponding to letters of the alphabet, to distinguish synthetic life from the old kind.

Here is Dr. Venter's take on the gestation of his namesake. "My co-authors Ham Smith and Clyde Hutchison III and I were discussing philosophically the differences among genomes, and the only way to answer basic questions about life is to get to a minimal genome, and the only way to get to that would be to synthesize a minimal genome. That started our 20-year quest. We were briefly interrupted by Ham and I taking time off to sequence the first human genome, but we came back in earnest in 2002."

I’m writing the twelfth edition of my textbook now, and am happy to include JCVI-syn3.0 – and whatever else follows before my deadline. Of course without a time machine we can’t ever truly know how life on Earth began, and that's why Dr. Venter stressed the importance of the word "a" before "minimal bacterial genome" in the paper's title.

Life may have started in many ways, at many times, as complex collections of self-replicating chemicals coalesced and polymerized, perhaps using clays or minerals as templates, then knitting themselves fatty protective coverings. Somewhere between the prebiotic simulations and creation of synthetic genomes lies answers. Glimpsing even one possible scenario for a first genome remains, to me, the most exciting type of experiment in biology.