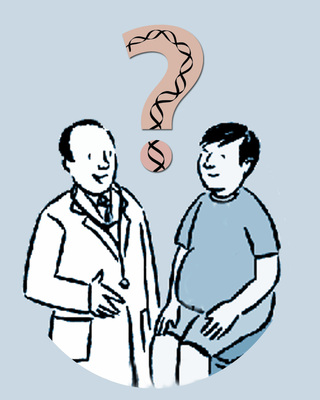 When President Obama uttered the words “Precision Medicine” in the state-of-the-union address, I scoffed at a politician’s finally noticing a field that’s been around for decades: medical genetics. Was it another case of rebranding, as chemistry has morphed into nanotech? But the definition of Precision Medicine that has emerged is, well, precise: “An approach to disease treatment and prevention that seeks to maximize effectiveness by taking into account individual variability in genes, environment, and lifestyle.”

THE PMI COHORT PROGRAM
Last week’s publication of the Precision Medicine Initiative Cohort Program report, plus an email that I received a few days ago, have convinced me that the PMI is perhaps the best research idea I’ve ever heard, dwarfing even the human genome project in its potential. A vast wealth of eclectic information will be amassed from a million volunteers who represent the nation’s diversity. They will donate blood and other tissue samples, such as nails and hair, to a biobank and actively participate at all stages.

The scope of the PMICP goes way beyond the goal of the now-defunct National Children’s Study, which wasn’t planned well enough to track environmental effects on health among 100,000 individuals from the womb to age 21, as President Clinton had proposed. And the PMI Cohort Program isn’t just another biobank, a trend that began with Iceland’s efforts more than a decade ago. It will record practically everything about the volunteers, beyond environmental exposures and genetic information, to lifestyle, behaviors, and even their microbiomes.

A perfect convergence of technological leaps underlies the PMI:

1. Genome sequencing costs are down 10-million fold from 1998, with time collapsed from a decade to a day.

2. Improved mass spectroscopy can analyze more metabolites that can serve as biomarkers, enabling us to track more diseases and our immune systems’ responses.

6. DNA-based ancestry testing is confirming or altering what greatgrandma told us about our geographic and ethnic origins.

8. Targeted therapies are replacing broader ones: Gleevec for chronic myelogenous leukemia, Kalydeco for cystic fibrosis, and the new hepatitis C drugs. Basing diagnoses on molecules rather than symptoms hikes efficacy. And the first gene therapy is expected to be approved in the US possibly during the coming year.

9. Some patients know more about genetics and genomics than their health care providers. I wrote about one dad who presented his son’s doctor with the boy’s exome sequence.

10. The human microbiome is being dissected, revealing the genomes within and on us.

Bioinformatics can store, analyze, compare, and continue to interrogate the floods of data that are coming.

The PMI Cohort Program may turn the practice of medicine on its head, and in so many ways, at so many levels, that my own head feels ready to explode with possibilities. Many of the ideas aren’t new, but the scale and scope are.

1. Clinical trials will be able to better select participants most likely to benefit from new therapies, based on the molecular pathology of the condition and a person’s specific genotype.

2. Pharmocogenetics and pharmacogenomics — matching patients to drugs based on DNA information — is already done for 150 FDA-approved drugs. But such prescribing information is needed for thousands more.

3. Analysis of biomolecules other than DNA, such as lipids and carbohydrates, and associating them with specific DNA sequence variants, will provide new, more meaningful biomarkers to contribute to more accurate diagnoses.

4. Identifying loss-of-function mutations in healthy people will uncover hidden sources of disease. Each of us has a few genes that are nonfunctional or missing, but the second, normal copy of the gene compensates for having only half the normal amount of the gene’s protein product. For example, a child with Tay-Sachs disease doesn’t have the enzyme hexosaminidase A. The cells of her parents, who are healthy carriers, manufacture half the normal amount, but it’s enough to protect their brains. For a few other conditions, a half load may affect physiology or health. Carriers of certain CFTR mutations do not have full-blown cystic fibrosis, but may be prone to respiratory infections. Carriers of sickle cell disease can collapse in oxygen-poor environments or under great stress. Loss-of-function mutations are also behind several neurodevelopmental conditions. But there is so much that we don’t know about what carrying loss-of-function mutations does beneath the whole-body level. The PMI Cohort Program will ultimately identify who carries what, and analyze these data against other measures, providing insights that we can only imagine.

5. Not all mutations are bad, and in fact some may protect, such as mutations in the CCR5 gene that block entry of HIV into a person’s cells. Another example is the gene PCSK9. Mutations in it substantially lower levels of LDL cholesterol, offering perhaps some protection to the heart and blood vessels from eating triple bacon cheeseburgers drenched in BBQ sauce every day.

6. Mutations in one gene may cancel out the effects of another. A person may learn that she has two copies of the well-known mutation in the apoE4 gene that predisposes to developing Alzheimer’s disease — but doesn’t know she also has a mutation in the less-well-known amyloid-B precursor protein gene that protects against the disease. The Cohort Program will eventually deduce and decipher all gene-gene interactions, perhaps reducing the anxiety of testing one-gene-at-a-time (one good reason that FDA halted direct-to-consumer testing for single genes).

7. Following people whose DNA indicates they should have a single-gene (Mendelian) disease but don’t, and finding similarities in the genomes of others like them, may reveal inherited protections. Spinal muscular atrophy I, for example, is a devastating disease that destroys motor neurons and is typically lethal within a year of birth. But in some families, two children have mutations in both copies of the survival motor neuron gene (SMN1) that causes SMA, but only one is sick. The lucky other also inherited a variant of a second gene, plastin 3, that counteracts the first. The interaction makes sense. Absent or abnormal SMN1 protein shortens axons, while the variant of plastin 3 protein lengthens them. The effects of the two mutations cancel each other out, and a child develops normally.

8. The rare disease community will be helped, not abandoned, by the Cohort Program. James Radke, PhD, at Rare Disease Report, pointed out that mutations in rare disease genes will be missed in the mass of a million sequenced genomes, and that it might be better to stick to mining for relevant gene variants in rare disease registries if the PMI focuses on common disorders. I thought he had a very valid concern, until this email arrived:

My family on my mother’s side has quite delayed aging. My grandmother, mother and myself all look a minimum of 15 – 20 years younger. My mother and I have absolutely no health concerns and have vital signs that are also indicative of people 15-20 years younger. I am 46 and my mother is 64.

I know there are world record holders that have amazingly long life spans, too, and other families which have characteristics of slower aging, like my own. Maybe there is something in our DNA, blood or proteins that is present which, through research, could be used to help patients with progeria, the rapid-aging genetic disease. Could these individuals provide information about why their bodies have a more delayed aging process than average, which in turn, could then be applied to the treatment of progeria?”

My new friend is an ideal candidate for participating in the PMI-Cohort Program — and I encourage everyone to sign up. We can all help each other. Summed up last week’s report, “We believe the combination of a highly engaged population and rich biological, health, and environmental data will usher in a new and more effective era of American healthcare.”

ASHG OR NORD ANYONE?
If anyone is going to the American Society of Human Genetics annual meeting in Baltimore and/or the National Organization for Rare Disorders Summit in Washington DC (where I’ll be on the Precision Medicine panel), coming up in October, let’s meet up! (rickilewis54@gmail.com).

Ricki,
How much money has been allotted for this project, and does our dysfunctional Congress have to approve the PMI-Cohort Program?

Hi Jon. I'm at ASHG and don't have the report here but m remembering $215 million. Better to read my blog at http://blogs.plos.org/dnascience/, I post more regularly with more images and get more comments. Great to hear from you and hope all is well.

The decline of the cost of whole genome sequencing( http://www.cd-genomics.com/Human-Whole-Genome-Sequencing.html)also makes this become possible now.

Yes, the cost of genome sequencing has gone from $22 million per genome to under $1000. And results are back in under a day. But annotation takes much longer and we do not yet know what all the genes do, let alone their interactions.