Using the Genetic Code for Passwords 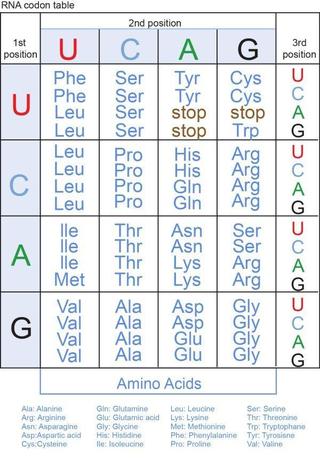 Many years ago, a friend was helping me set up a desktop computer. When the time came to choose a password, he said it should be:

• Alphanumeric
• More than 7 numbers or letters
• Obvious to me, but not to anyone else

The genetic code popped into my mind, and has remained an endless source of diverse passwords, valuable because they may seem nonsensical to non-biologists.

The genetic code is the correspondence between the 20 types of amino acids and the 61 types of RNA triplets (codons, representing DNA) that specify them. The same codons specify the same amino acids in all organisms. The DNA of humans, hydras, hippos, hydrangeas, Haemophilus influenza, and even viruses follows the same rules in specifying proteins.

That is, the genetic code is a universal rule book.

Perhaps in response to frequent use of the term “computer code,” the definition of “genetic code” has morphed into referring to any DNA sequence, rather than the correspondence. When even Francis Collins, Craig Venter, the media and museum exhibits refer to personal genetic codes, the older idea of universality can seem confusing. But it's why human proteins can be manufactured in bacterial cells, bacterial insecticides produced in corn, and an experimental Ebola vaccine made in tobacco cells.

Francis Crick had the idea of genetic code words (codons), which Marshall Nirenberg and Heinrich Matthaei at the NIH brilliantly demonstrated in 1960 and 1961. They challenged bacterial cells to make tiny proteins using simple RNA sequences. When UUU led to a string of phenylalanines, for example, they had the first piece to the puzzle: the RNA codon UUU encodes the amino acid phenylalanine. Fed more complex polymers, the bacteria revealed more pieces of the genetic code puzzle.

Wrote Dr. Nirenberg in his research notebook, “we would not have to get polynucleotide synthesis very far to break the coding problem … we could crack life's code!” And so they did.

The genetic code is ancient and makes life (and biotechnology) possible. But it also makes great passwords!

The combinations of codons and amino acid abbreviations are nearly limitless. Here are some suggestions:

The genetic code is redundant -- CCA and CCG both encode proline, for example – but passwords are not. Substitute that end G for the end A and your Amazon account won't work.

Plan your password choices. Once I had to change my Apple ID under time pressure, and I inadvertently typed in CAA for histidine, only to discover, to my horror, that I had specified glutamine. I advise having a chart of the genetic code in front of you in such emergency situations. If you’re a life scientist you already know the amino acid abbreviations.

Perhaps we can begin a discussion of other important DNA sequences that can be honored with passwords. Suggestions welcome!