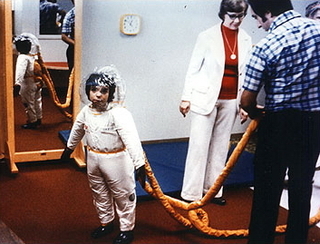 David Vetter had SCID-X1 and became known as the bubble boy. (NASA)
Beneath all the bad news about viruses this week lies a good virus: the one that underlies gene therapy for X-linked severe combined immunodeficiency (SCID-X1),

Altered viruses are the vehicles that transfer healthy human genes into the cells of people in whom the genes aren’t working, providing a slew of new “forever fixes.” Nearly 100 gene transfer protocols are now in late-stage clinical trials.

An article in this week’s New England Journal of Medicine sets gene therapy back on track, after a previous clinical trial treated the disease but triggered leukemia. The ongoing saga is also a terrific example of how scientific inquiry catalyzes medical progress.

SCID-X1 became widely known as “bubble boy disease” in 1976, when John Travolta played David Vetter in the film “The Boy In The Plastic Bubble,” a year after he rocketed to fame as sweathog Vinnie Barbarino on the TV program “Welcome Back Kotter”.

David Vetter was born at a hospital in Texas in 1971 and immediately placed into a habitrail-like apparatus. His parents knew a son would have a 50:50 chance of inheriting the condition because they’d already lost a newborn to it.

For years, David wanted out of the bubble. The doctors let that happen when he was 13, to receive his sister’s bone marrow in an attempt to cure his immune deficiency. But David succumbed within weeks to lymphoma seeded by the Epstein-Barr virus in her donated cells.

By 1993, researchers better understood the disease. SCID-X1 impairs the gamma chain of the interleukin-2 receptor (IL2RG), which triggers an immune system shut-down: first T cells and natural killer cells, then B cells, so that the body makes neither cytokines nor antibodies.

“Because IL2RG is needed for many cytokine receptors and immune cell development, kids die of viral infections in a year,” said David Williams, MD, chief of the division of hematology/oncology and director of translational research, Boston Children's Hospital, at the American Society of Gene and Cell Therapy annual meeting last May, where he discussed the results reported this week.

Alain Fischer, MD, PhD, of the Necker Hospital for Sick Children in Paris and colleagues did mouse experiments in 1994, applied to begin clinical trials by 1997, and by 1999, the first boy, an 8-month-old, received his own bone marrow cells carrying healthy SCID-X1 genes, delivered in a retroviral vector. The team waited until the April 18, 2002, New England Journal of Medicine to publish results on the first 5 children treated, to allow enough time to track building immunity.

In the months after, one of the boys developed a swollen liver and spleen, and his white blood cell count began to climb. By summer’s end, blood tests clearly indicated leukemia.

It was exquisitely bad timing.

The gene therapy community was still reeling from the death of 18-year-old Jesse Gelsinger in 1999, from gene therapy for a very different disorder. Although 18 of the 20 boys given the gene therapy for SCID-X1 established immunity, 5 developed leukemia, and one would ultimately die from it.

In the fall of 2002, when only one boy had leukemia, it seemed a family history of cancer or recent bout of chickenpox might have been at fault. But then a second boy developed leukemia. By October 2003, the research team nailed the culprit: the retroviral vector had integrated into an oncogene called LMO2.

Retroviruses normally home to very active genes, oncogenes among them. But the vector used in the first-attempt SCID-X1 gene therapy included DNA sequences that enhanced the oncogene’s activity, revving up cell division.

And so an international team (including besides Boston Children’s and the Necker Hospital, also Great Ormond Street Hospital, Cincinnati Children’s Hospital Medical Center and UCLA Mattel Children’s Hospital) began again, in what several researchers at the gene therapy meeting in May called a “do-over.”

In the second go-round, the viral controls were replaced with DNA sequences strong enough to make enough of the errant IL2RG gene, but less likely, if able at all, to ramp up oncogene action. The new breed of viral vectors now used in gene therapy clinical trials are comfortingly “self-inactivating,” termed SIN.

THE SECOND TRY AND BEYOND

This time, so far, the gene therapy for SCID-X1 is effective and safe. Seven of 9 boys treated with the new vector have regained immunity, without developing leukemia. Times since treatment range from 16 to 43 months, with a median of 33 months. But because leukemia took up to 5 ½ years to show up in the first study, the current group of patients will be followed for 15 years.

For this second trial, the researchers tracked where the vectors inserted into the boys’ genomes. Compared to the trajectories of the first-generation vectors, the retooled ones seemed to avoid 21 regions that house cancer-associated genes.

As work continues on the retroviral approach to treating SCID-X1, a third-generation vector is in the works too, from NIH researchers. They are using SIN lentivirus (disabled and engineered HIV) that doesn’t home to the LMO2 oncogene. It’s being tested on young adults whose transplants have lost effectiveness, with promising results so far.

Success for the ADA deficiency form of SCID is on track too. “More than 50 patients have been treated by gene therapy between trials in Italy, the UK and our trials in the US in the past decade and a half. None have had complications from the gene transfer and most have successful immune reconstitution," says Donald Kohn, MD, a co-author on this week’s NEJM paper and from UCLA. "It's becoming the treatment of choice for patients lacking a matched sibling donor, surpassing the alternatives of a matched unrelated donor or a half-matched parent donor, and far less costly than ongoing ADA enzyme replacement therapy,” he added. Transplants also bring the risk of tissue rejection and graft-versus-host disease.

• “Breakthroughs” aren’t usually news, but can actually reflect decades of work by hundreds of researchers, including undergrads, grad students, technicians, and post-docs, not just the prizewinners or those with the most Twitter followers or TED talks.
• Progress reports are often presented at scientific and medical meetings, and if the media attend, articles follow (although speakers may not realize this). That’s why the headlines and endless repetition of press releases via news aggregators following publication in a major journal can seem like echoes. They are.
• “Scientific proof” doesn’t exist. Every result sparks new questions, and no conclusion is ever final, for what we learn continually teaches us how much more we need to know. If not, we’d still think the Earth was flat, that proteins are the genetic material, and that the entire human genome encodes protein.

“It's a reflection of the iterative bench-to-bedside process, with initial clinical observations spurring further research studies and a next generation of treatments brought to the clinic. For this specific disease, SCID-X1, this study represents a do-over in using the indisputable logic of gene therapy to treat this most responsive disorder, using prior lessons to do it even better.”

For a history of gene therapy, see my book The Forever Fix: Gene Therapy and the Boy Who Saved It.

This post first appeared at DNA Science, my weekly blog at Public Library of Science.
Be the first to comment