Another Bump in the Road for Gene Therapy? 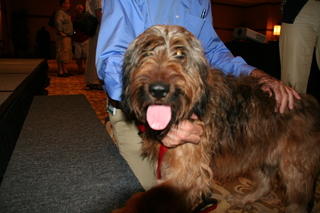 Mercury can see, thanks to gene therapy. (Foundation for Retinal Research)
I am astonished, once again, by the complexity and unpredictability of science.

Last week, a paper in the Proceedings of the National Academy of Sciences (PNAS) reported that gene therapy to treat a form of blindness called Leber congenital amaurosis type 2 (LCA2) doesn’t stop degeneration of the rods and cones – the photoreceptor cells that provide vision. Gene therapy sends the genetic instructions for a protein called RPE65 into a layer of cells that supports the rods and cones – the retinal pigment epithelium, or RPE. The protein is essential for the eye to use vitamin A. And the gene therapy works, so far.

NOT A FOREVER FIX?
I recently wrote a a book about this gene therapy, because the results were so dramatic. On a bright September day in 2008, 8-year-old Corey Haas looked up at a hot air balloon at the entrance to the Philadelphia zoo just 4 days after gene therapy at Children’s Hospital of Philadelphia, and screamed. For the first time, he could see the sun. More than 230 people have had the gene therapy, in four clinical trials, and most of them now have some sight.

Researchers at the Scheie Eye Institute of the University of Pennsylvania (not the same group that worked on Corey) and the Penn School of Veterinary Medicine used imaging technology to track thinning of the photoreceptor layer at several sites in the retina, in people who’ve had the gene therapy and in dogs who pioneered the approach. They compared degeneration in treated and untreated eyes of the same individuals (one eye is treated first). They watched the same retinal regions in the same eyes over time. And they compared treated eyes to eyes from people with LCA2 who didn’t have gene therapy.

The conclusion seems dire: “All three analysis methods supported the conclusion that gene therapy has not modified the natural history of progressive retinal degeneration in the RPE65-LCA patients,” the researchers wrote.

I was puzzled. The researchers had analyzed rods and cones from several areas in the retinas, but I couldn’t tell from several reads of the paper whether they included the sites where the gene therapy had been injected. Unfortunately and inexplicably, the researchers declined my request for an interview to clarify this important point.

So everyone’s speculating and hypothesizing about what the findings mean. A big clue comes from the dogs.

Data from the dozen years that dogs have undergone the gene therapy may reveal why the treatment doesn’t save photoreceptors in people. Development differs. Dogs with LCA2 have a few years when their rods and cones are just fine, and if they have gene therapy during this period, the cells stay that way. Gene therapy done after the rods and cones have begnun their downward spiral can’t save them.

Unlike dogs, in a baby with LCA2 the photoreceptors are already dying. The dogs in the trial may have been too young to exactly mimic the situation in people. (The dogs are naturally blind, and are offered to families with LCA as pets.) Perhaps gene therapy in people should be done as early as possible – which researchers had already suspected because of the increasing severity of the disease with age.

When I read the paper, I couldn’t help but think of the novel Flowers for Algernon, by Daniel Keyes, which inspired the film Charly. A young man with mental retardation (the correct term in 1958, when it was written) is chosen for an experimental surgery that has greatly increased the intelligence of a mouse named Algernon. Told through Charlie’s journal entries, the tale traces his restored intelligence, and then its tragic dissipation.

Will the people who’ve had gene therapy for LCA2 experience Charlie’s fate, a temporary gift of normalcy? Nothing suggests this yet, but the new study is disturbing.

Last week I attended the Phacilitate Cell & Gene Therapy Forum in Washington, D.C., and had a chance to seek opinions about the paper, and interviewed experts for Medscape. So I thought a roundup of informed opinions and interpretations might help to put these findings into perspective.

"The PNAS paper provides beautiful evidence of stable rescue of retinal and visual function in large animal models and humans and also attempts to tackle the question of long-term effects of gene therapy on the degenerative process. This group also looked into the question as to whether the intervention slows the degeneration. This is a very tricky question as it can take many years to observe loss of cells in slowly progressing diseases such as LCA. The authors used non-traditional methods to evaluate the data with hopes of getting a faster answer. They did not present any of the raw data (such as assessment of retinal thickness at or near the injection site) as it was all normalized, reassigned to different ages in order to fit the data into a mathematical model and to a theoretical model of degeneration age and then it was compared to a control population. Thus it is impossible to assess data from individual subjects/eyes. Also, it is not clear that the study had the statistical power to detect a meaningful difference in different regions of the retina. The conclusion that this treatment does not halt degeneration thus may be premature. The take home message should thus be that the treatment appears to work and it also appears to have an enduring effect."

Gerald Chader, PhD, chief scientific officer at the Doheny Retina Institute:
“The paper proves the value of gene therapy – we can improve vision for at least several years. Saving the photoreceptors long-term is just not as easy as we had originally hoped. I think that the results show us that things are never as simple as initially thought or hoped for. Gene therapy still works, but other measures need to be taken. Maybe we can call these “refinements”? Early treatment may be the key.”

Steven Gray, Ph.D., Research Assistant Professor, Gene Therapy Center, University of North Carolina:
“I don't see this as a flaw in the natural history analysis of the disease. In essence, it just says that the whole retina wasn't treated and as a result there is still degeneration. The Leber's gene therapy as it stands is a treatment, not a cure.”

Samuel Jacobson, MD, PhD, co-author of the PNAS paper, in a news release:
“These unexpected observations should help to advance the current treatment by making it better and longer lasting.”

Weng Tao, MD, PhD, chief scientific officer at Neurotech USA:
“In the long run we might use a drug to preserve the photoreceptors and another drug (the gene therapy) to replace the defective gene. “

MOVING FORWARD: TIMING AND TEAMING
Clinical trials for LCA2 are about to enter phase 3, and gene therapy trials for other forms of LCA, caused by mutations in different genes, are planned. Preclinical work continues. So the new findings of persistent photoreceptor degeneration can inform future experiments:

• Will gene therapy provide a more lasting effect in younger patients?
• Can researchers deliver more genes in one injection, do multiple injections at once, or serial gene treatments to the retina?
• Does rate and location of photoreceptor degradation correlate to loss of visual function?
• Will the degeneration of the rods and cones be fast enough to impair the vision regained with gene therapy?
• Can gene therapy be teamed with photoreceptor-saving drugs, such as anti-oxidants, anti-apoptotic factors, and neurotrophic factors?

Unexpected findings are nothing new in science. That’s why there’s no such thing as “scientific proof.” Surprises prompt researchers to ask new questions. In the case of Leber congenital amaurosis – a collection of rare disorders that lie at the severe end of retinitis pigmentosa -- the families are very involved with the research.

I learned about the PNAS paper not from the news releases and journal offerings that crowd my inbox, but through Facebook posts from the families whom I got to know when writing my book. You can meet them at Let’s CURE Leber’s Congenital Amaurosis. They’ve raised thousands of dollars to support gene therapy research, and they thrive on the hope that the LCA2 success will be repeated for the other forms of blindness.

And gene therapy for LCA2 IS a success. As Rare Disease Day approaches, let’s hope that the bump in the road introduced in the recent PNAS will lead to true forever fixes – for many diseases.