Hidden Meanings in Our Genomes – And What To Do With Mendel 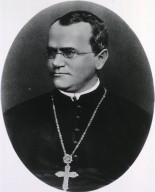 Gregor Mendel: should he stay or should he go (in textbooks)? (National Library of Medicine)
Summer reading for most people means magazines, novels, and similar escapist fare, but for me, it’s the American Journal of Human Genetics (AJHG). Perusing the table of contents of the current issue tells me what’s dominating this post-genomic era: information beyond the obvious, like a subtext hidden within the sequences of A, C, T and G.

In the decades following the cracking of the genetic code in the 1960s – the correspondence between DNA (actually RNA) triplets and the 20 types of amino acids in biological proteins – the “one gene-one protein” mindset guided genetic research. Researchers used indirect methods (based on recombination rates) to map genes to chromosomes, then painstakingly made the gene-protein assignments, describing rare, single-gene diseases, one at a time.

I looked at past issues of the AJHG at decade intervals from this time of year, to place the current issue into perspective. The September 1982 journal had crude linkage maps of 4 human chromosomes, the idea of a human genome project not yet uttered. Within the next decade, a flurry of genes behind the more familiar single-gene diseases began to reveal themselves: myotonic dystrophy, cystic fibrosis, Duchenne muscular dystrophy, the first type of osteogenesis imperfecta, and the elusive Huntington disease among them.

The 2002 AJHG held the first inklings of moving beyond the single gene approach, with “genomewide” and “associations” entering the lingo, soon to be wed into the GWAS – genomewide association studies – that dominated until the recent takeover by whole exome sequencing. Articles dealt with SNPs and susceptibilities, described mutations in non-amino-acid-coding parts of genes, and included more environmentally-influenced traits and conditions, such height and bipolar disorder.

And now, the tone and content of the August 2012 issue highlight how the information in DNA goes far beyond one-gene-one-protein. Here are some such hidden meanings:
• A mutant gene behind a form of amyotrophic lateral sclerosis (ALS) also causes essential tremor. In ALS, a missense mutation, which alters an amino acid, hangs around in motor neurons and does something – we still don’t know what – that shuts down the cells. But in essential tremor, the mutation is nonsense, which halts production of the protein and activates a cellular garbage disposal pathway that removes the incomplete proteins, with less dire consequences. (The gene, FUS, accounts for only 4% of the 10% of ALS cases that are inherited).
• A fifth form of osteogenesis imperfecta ("brittle bone disease") stems from a mutation in the control DNA sequence that lies before the protein-encoding sequence. So instead of spelling "get ready to start," the mutation tacks five amino acids onto the 132-amino-acid protein. The gene had eluded classic linkage studies and even the Sanger sequencing of the human genome project.
• A "potential biomarker for susceptibility to and prognosis for lung cancer" lies in having 4 copies of a particular repeated sequence, compared to having 2 or 3 copies, in the promoter control region of a gene called MAPKAPK2.
• Don’t forget chromosomes! We each have TWO copies of the genome in all cells but our sperm and eggs. If a person has two recessive mutations in a disease-causing gene, it can mean either of two things: sickness if the glitches are on different copies of the same chromosomes (the "trans" configuration, inherited from both parents), yet not if the mutations are within the same gene on the same chromosome (the "cis" configuration, inherited from one parent). Geneticists have long deduced cis and trans "phase" effects in large families, but the task toughens for today’s multiplex genotyping of many thousands of individuals. Existing statistical methods infer neighboring sequences from what’s most common, constructing a "haplotype" of gene variants linked closely along a chromosome – but David Reich’s group from the Broad Institute describe a powerful new method in the August AJHG.

I pay special attention to the tables of contents of genetics journals because, since 1993, I’ve been the author of a human genetics textbook. The above four phenomena aren’t new – just illuminated since the genome project revealed the protein-encoding parts, the tiny 2% that is the exome. But what may change in the next edition of my textbook is not what to include, but what, or rather who, to exclude: the "father" of genetics – Gregor Mendel.

A listserv for biology instructors recently debated Mendel’s fate, inspired by an article by Rosemary Redford of the University of British Columbia, 'Why do we have to learn this stuff?'-A New Genetics For 20th Century Students. In this day when people can order DNA tests over the Internet, some said, the famed pea plant experiments published in 1865 are no longer relevant, or even interesting. Others objected to the folklore of Mendel as genetics’ Galileo, the misunderstood hero working tirelessly in his monastery garden, then his work ignored.

And so the story of the monk and the beautiful illustrations of the tall and short pea plants with their wrinkled and round, green and yellow peas that have festooned chapter 4 in my textbook for 10 editions will probably be buried in an appendix in the 11th. For in this post-genomic age, there’s simply too much else to discover, in both the obvious and not-so-obvious terrain of our genomes. The same can be said for all of science – whenever we take a huge leap, such as sequencing the human genome, what we discover is that we actually have much more to learn.

This entry was first published at ScientificAmerican.com on August 20. Genetic Linkage will move to Public Library of Science blogs in mid-September. A step up!