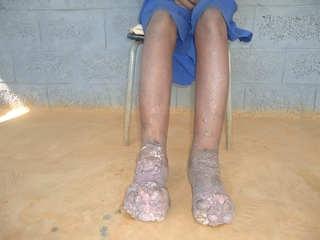 Podoconiosis is painful and isolating, affects millions, and is completely curable -- with shoes.
This blog was first published at Scientific American blogs

The hideously deformed feet of podo result not from mosquito-borne parasitic worms, as does filarial elephantiasis, nor from bacteria, like leprosy. Instead, podo arises from an immune response to microscopic slivers of mineral that penetrate the skin of people walking barefoot on the damp red soil that tops volcanic rock. Podoconiosis means “foot” and “dust” in Greek.

A Profile of Podo
The condition develops gradually. After microscopic shards of silica slip into exposed skin of susceptible individuals, the bottoms of the feet swell. Then the tops, near the toes, itch. Months may pass, and then the lower legs begin to feel as if they are burning. The sensation may creep upwards as the toes stiffen and moss-like growths appear on the feet. The lumps enlarge and slowly harden, becoming brownish-red, hot, and very painful in spots. The feet stink. In 2011 the World Health Organization added podo as the 17th neglected tropical disease.

The 4 million people who have podo live in 15 countries, in the highlands of Africa, Central and South America, and northwest India. A million are in Ethiopia alone, half that in Cameroon. In some areas, one in 10-20 people suffers from it. Most are subsistence farmers. Wearing shoes and socks prevents the condition, and for those in the early stages, frequent washing with soap and antiseptics, elevating the feet, and, for some, bandages and/or surgery can help. But “in time it becomes a very hopeless situation,” said Adebowale Adeyemo, MD, deputy director of the trans-NIH Center for Research on Genomics and Global Health (CRGGH) and a staff scientist at the National Human Genome Research Institute (NHGRI).

Fasil Tekola Ayele, a postdoctoral researcher at the CRGGH, grew up seeing the shunning of people with podo. He led fieldwork in Ethiopia, culminating in a report in the March 29 New England Journal of Medicine that explains, finally, why not everyone who traverses the red soil unshod sacrifices their feet.

The report is groundbreaking. “This is the first study of a non-communicable disease to have used genome-wide association for any African population,” said co-author Charles Rotimi, PhD, MPH, and director of the CRGGH.

A Stigma
I first heard of podo at the Joint International Conference of the African and Southern African Societies of Human Genetics, held in Cape Town in March 2011. Ayele’s talk was one of the last, and the crowd was thinning. I was looking forward to the field trip to Robben Island, but I was transfixed by the images of this horrific disease that seemed so simple to prevent. I tried to catch up with Dr. Rotimi to discuss it on the trip, and finally did when our tour guide, a former prisoner, ushered us in two at a time to see Nelson Mandela’s jail cell. There I was next to Dr. Rotimi, but it was hardly the place for a spontaneous interview.

Mossy foot is a tragedy of a different sort than that of the long-imprisoned South African leader. “Podoconiosis is a disease of the poorest of the poor. These people do not have a voice and their problem has remained ignored. It’s a non-communicable disease that occurs in low income countries where resources are allocated mainly for communicable diseases,” said Ayele.

The stigmatization is ingrained. “Unaffected members of the community are less willing to marry an individual from a podo-affected family because people believe it runs in families and can’t be prevented. Children are ostracized and drop out of school,” Ayele said. Families hide their mossy-footed members, who aren’t welcome in market places and churches, or at social events.

Ayele began the journey that led to his genetically profiling of the disease in 2004, when he heard Dr. Gail Davey, an epidemiology professor, describe her research. The young man focused his Masters in Public Health project on the economic burden of the disease. “The hopelessness, social stigmatization, physical and psychological trauma of these patients quickly penetrates your heart,” he said.

While earning his doctorate from Brighton and Sussex Medical School in the UK, Ayele began collaborating with the NIH team and the Armauer Hansen Research Institute in Ethiopia. The team set out to explore the genetics of podo – both to understand the disease mechanism, and to find a way to get shoes to those most in need. “Podo is almost one hundred percent preventable by wearing shoes,” said Rotimi.

Genomics Leads to Classic Genes
Podo clearly “runs in families.” Someone with an affected sibling is five times as likely to get it than others. But exactly which variants of which genes distinguish those who develop the condition from those who don’t?

To find out, the team collected saliva samples from residents of the Wolaita zone of southern Ethiopia and sent it to DeCODE Genetics, where the DNA was typed for half a million SNPs (single nucleotide polymorphisms), sites in the genome where people vary. SNP sets found in 194 cases but not in 203 “supercontrols” -- people obviously resistant because they’d spent more than 50 years walking barefoot on the red soil -- pointed to a very logical place in the genome: the HLA class II genes on chromosome 6.

The researchers validated the findings in parent/child trios, and zeroed in on specific HLA genes (DRB1, DQA1, DQB1, DPB1) in 94 cases and 94 controls. Having variants in these four genes raises risk of podo 2-3 fold. These genes have been implicated in other conditions linked to silica exposure, and to reaction to another mineral, beryllium. The HLA link also suggested how podo happens: T cell-mediated inflammation.

An immune response kicks off when a T cell recognizes a peptide from a pathogen or foreign substance displayed on an antigen-presenting cell. In podo, silica somehow either alters a self peptide to make the body attack itself, or activates an antigen presenting cell some other way, triggering runaway inflammation.

The three HLA gene complexes hold a special place in the history of genetics. They are our version of the major histocompatibility complex found in all vertebrates, and encode the proteins that determine who can accept an organ from whom. HLA genotyping was the forerunner of today’s DNA tests used to predict disease risks. “Several diseases including infectious, non-infectious, and autoimmune diseases have shown association with HLA class II genes. Examples include malaria, tuberculosis, HIV/AIDS, type 1 diabetes, and rheumatoid arthritis,” explained Ayele.

The 1970s and 1980s saw discovery of many HLA-disease associations. I wrote in the first edition of my textbook Life (my virgin ISBN, copyright 1992): “In the future, an HLA profile taken at birth may be used to predict disease susceptibilities. Would you want to know which medical conditions you are likely to suffer from late in life, and perhaps even die from?” Substitute genome sequence for “HLA profile” for an instant update.

Uniting a Community
More important than understanding the precise steps of the tango between antigen-presenting cells and T cells is using genetic testing to get shoes to those in greatest need. Ayele calls the strategy a “low tech, cost-effective, and locally and culturally feasible genomic tool.”

Community acceptance of genetic testing to target shoe distribution is a nice contrast to negative reactions to researchers bearing swabs or needles for DNA tests in other places and times. Sheila Vanholst, PhD, from the University of New South Wales in Sydney encountered this resistance in her fieldwork with the Aborigines, descendants of Australia’s first peoples. “They distrust studies, particularly since the Human Genome Diversity Project distanced them by calling them ‘vanishing peoples,’ she told me at the International Congress of Human Genetics in Montreal in October 2011, referring to the ill-fated project that sought to collect DNA from the world’s indigenous populations. The Aborigines, like Arizona’s Havasupai Indians and others, regard genetic ancestry research as threatening their sense of identity and challenging their beliefs about their origins. The positive response to the podo project is more like the willingness of the people of Lake Maracaibo, Venezuela, to provide DNA samples to Columbia University psychologist Nancy Wexler to help identify the mutation that causes Huntington Disease (HD) – the people gave samples in exchange for jeans and M&Ms.

Sadly HD still has no cure, but podo is another story. “Podoconiosis is a low hanging fruit- it can completely be eliminated from the face of our planet,” said Ayele, who’s visiting Ethiopia at the end of this month. Summed up NHGRI scientific director Dan Kastner, MD, PhD, “This study draws attention to a neglected tropical disease with a devastating impact on poor people and their communities. It demonstrates the global reach of genomics research into the lives of people in parts of the world where endemic diseases very often go unchecked.”


To learn more and help, see Footwork from the International Podoconiosis Initiative and from Ethiopia The Mossy Foot Project. California-based TOMS Shoes has a collaborative project with local non-governmental organizations working on podo in Ethiopia.