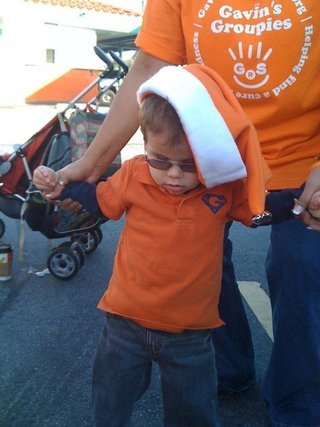 Gavin's mutation (in the NMNAT1 gene), discovered 8 months ago, was announced July 29, in Nature Genetics.
I'm rerunning this blog post from November, because Gavin's mutation was announced today -- the first step towards a gene therapy! Tomorrow I'll run my blog on the discovery that is now on Scientific American blogs.


In a hotel ballroom on the campus of the University of Pennsylvania on a midsummer Saturday in 2010, an unusual roll call was under way at the Family Conference for the
Foundation for Retinal Research. Betsy Brint, co-head of organization, was calling out what sounded like code words – CEP290, GUCY20, LRAT – and for each one, a few people would stand up, excited, then form little groups. After all 18 abbreviations had been called, representing the genes known to cause Leber congenital amaurosis (LCA), a few sets of parents were left standing. Troy and Jennifer Stevens, of Chino, California, were among those whose childrens’ genes and mutations were still a mystery.

In October, 2008, Jennifer had sensed instantly that something was wrong with her newborn. “They handed me a perfect-looking baby and I knew. It was an overwhelming feeling that I couldn’t dismiss.”

After a nearly-year-long medical odyssey -- from pediatrician to ophthalmologist to pediatric retinal specialist – the diagnosis loomed. Jennifer and Troy quickly learned that Gavin would need genetic testing to find out what type he had, but a doctor at Children's Hospital Los Angeles said not to bother, for there was no treatment – unaware that gene therapy for one type of the disease, LCA2, had already worked, just a month before Gavin was born, on an 8-year-old.

Ignoring the doctor’s dire prediction, the Stevens’ sent Gavin’s blood to a genetic testing lab that specializes in eye diseases. It was December 2009, and Gavin was 14 months old and completely blind. Troy and Jennifer had met other LCA families on Yahoo and Facebook who’d used the lab, “and they got results in 2 months, some in 6. But every time I e-mailed the lab, they said ‘oh, we’re working on it,” Jennifer recalls.

Then at the family conference, Jennifer and Troy met with the director of the testing lab, who couldn’t believe they’d been waiting so long. “So he called the lab. We sat there, listening, and then he said, ‘The results are inconclusive. Gavin doesn’t have one of the genes.’ I don’t know how long they had that information but had not given it to us,” Jennifer says.

Part of the confusion was that at that time, the lab only tested for a few of the 16 genes then known to cause LCA, and only the most common mutations. This was a strategy based on economics, to minimize costs while maximizing the number of patients diagnosed. But that led to false negatives, a lot of erroneously equating of “we didn’t find a mutation” to “there’s no mutation,” and scant if any information at all for patients with rare disease variants.

A few parents distressed by the partial test results had told Troy and Jennifer about John (Pei-wen) Chiang, PhD, who was then at the University of Denver and is now director of the Molecular Diagnostic Laboratory at the Casey Eye Institute in Portland, Oregon. And so at 11 PM on that Saturday night, a desperate and angry Jennifer e-mailed Dr. Chiang. She was stunned at how quickly he responded.

“I called her back within a half hour, and promised to do my best to help. Then I read her blog and learned all about Gavin,” Dr. Chiang picks up the story.

“As soon as we flew home, we went to the hospital and got bloodwork done and sent it to Dr. Chiang,” Jennifer recalls. And he tested for all known LCA genes – and not just the common parts of them – in two months. “He wouldn’t take no for an answer. If we’d went with what our first doctor said – it’s so far out from a treatment there’s no rush on bloodwork -- we’d still be sitting here with our hands tied behind our backs,” she adds.

Dr. Chiang describes his passion simply: “This is not a tube of DNA with a number, there is a human being behind it.” And when Gavin’s DNA didn’t match any of the known LCA genes, Dr. Chiang facilitated the next leap: whole exome sequencing.

The exome is the part of the genome that tells the cell which proteins to make, which is what lies behind a trait or a disease. Looking at an exome is a little like downloading a book to a Kindle or Nook, compared to a chapter (sequencing a gene) or a few paragraphs (the common mutations in a gene). The answer is in there, but requires searching.

Dr. Chiang sent DNA from Gavin, Troy, Jennifer, and the grandparents to Ming Qi, PhD at the Beijing Genomics Institute, where he knew the sequencing would be done quickly. A few weeks later, a big excel file came back, which Dr. Chiang analyzed over the course of several weekends.

He set three criteria for finding Gavin’s gene: “First, because it is a rare condition, variations must be novel. Secondly, because Gavin is very severely affected, he must have at least one nonsense mutation (in which the encoded protein is very short). The third criterion is that it is recessive."

Adhering to those predictions, Dr. Chiang found Gavin’s two mutations. Jennifer’s came from her mom, and Troy’s from his dad. Now Dr. Chiang is trying to figure out how the gene blocks vision – and he’s found the mutation in other families.

“When we don’t find a mutation, we sequence every gene involved, and when we still don’t find a mutation, those samples become very valuable to find new disease genes. That’s the reason I took the whole exome approach for Gavin,” Dr. Chiang explains. The finding may one day help Gavin, and others, because the first step towards gene therapy is to identify the genetic error. Researchers must learn what to replace.

The day is fast approaching when whole genome and exome sequencing become the norm, for researchers and then clinicians, replacing pricy panels of specific gene tests. “Next-generation” DNA sequencing and improved data analyses are already bringing the price down. At the summer 2010 meeting where Jennifer and Troy learned the first lab couldn’t identify their gene, the lab director estimated it would cost $50,000 to $100,000 to do exome sequencing on a family. Yet today, at least two companies, Knome and Complete Genomics, offer sequencing and interpretation of human exomes and/or genomes for about $5,000 each, to researchers.

Sums up Jennifer, “I hope more parents get the phone call saying ‘we have identified your gene’. After being in limbo for years, it’s nice to finally have an answer.”

At the next Foundation for Retinal Research meeting, Jennifer, Troy, and Gavin will be able to stand when their gene is called. It’s a first step towards a cure.