A Good Death, the Hospice Way 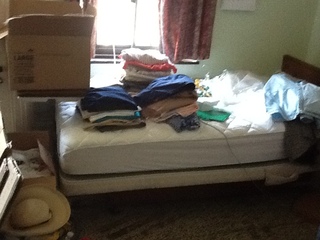 I stood among her things, piled on the bed, a scene that always astonishes me. For this is what many people are reduced to at the end: after a series of downsizings, a small pile of stuff.
This morning I drove up to what’s left of the Glendale Nursing Home, in Glenville NY, a mile from my home. The series of connected old buildings is still intact, a backdrop to a new gaping hole that will give forth to a new facility. But for now, the hole in the ground serves as a metaphor for what I would encounter when I went to see my hospice patient, Ruth.

She wasn’t in her chair on the A wing hallway as she’d been for the past 6 weeks, ever since the cancer spread to her brain and she could no longer get around on her own. Each day, the staff had gotten her out of bed, dressed her stylishly and combed out her long white hair, and put her Nikes on her feet, even though she wasn’t going anywhere. They knew how much she cared about her appearance. And so she sat, mostly napping, but still able to recognize me and the other hospice volunteer. And of course she knew her three sons and their families.

“Ruth is in heaven,” said a young nurse as she saw me approach Ruth’s room today, looking puzzled. And despite expecting it, every day for weeks, I was shocked. Still, her passing was merciful, for this bright, vibrant woman seemed unaware of the mental functions she’d lost. When she’d first had trouble finding the right words, in May, she was distraught. But for the past month or so, her mind had taken her back to happier times on the farm where she grew up in Virginia. I worried about her pain; she worried about picking cotton.

I stood among her things, piled on the bed, a scene that always astonishes me. For this is what many people in our country are reduced to at the end: after a series of downsizings, a small pile of things. Books. A tube of Pringles. A Mexican hat.

Ruth worked nearly all her life. She supported her children, often alone, as she advanced from waitress to restaurant manager, of which she was very proud. She had savings, but it dwindled rapidly once she moved to assisted living. Ruth wouldn’t dream of asking her sons to help support her. And so last February, when given the choice of a surgery that she would likely not survive, or comfort care in a nursing home, she chose the latter.

When I met Ruth on February 27, she was so alert and vivacious that I couldn’t believe she was in a nursing home. But she had liver cancer, and since both of my parents died from that, I knew she didn’t have long.

We quickly fell into a comfortable friendship, based on our love of books. The last book we discussed was a wonderful story about Mormon women on the trail from Appalachia to the great Salt Lake – we talked about how we would have handled polygamy. When the local newspaper ran a story about my new book, I brought her copies. She kept my books in a special drawer. Today they are part of the pile on her bed.

When I returned to the nursing home an hour ago with my iPad to photograph Ruth’s room, one of her sons was there, trying to decide which things to leave to the other patients. He thanked me for visiting his mother, and I asked about funeral plans.

“Oh, she won’t be having a funeral. She donated her body to Albany Med. She wants the students to learn from her, and then she’ll be cremated.”

I’m not surprised. For Ruth Wallace taught me a lot, too.

I could see how much she was loved from the faces of her family, as they arrived over the past few weeks from as far away as Florida. They took care of her, and laughed with her, knowing instinctively that a dying patient would rather talk about happy times past than dwell on the present.

I will never forget Ruth’s optimism. She never complained about pain, the drab walls, her roommate who’d raise a fuss if Ruth’s easychair inched over the center line, or even the noise of the construction that she knew would soon swallow her final home. When I hear residents at assisted living places complain about the quality of the entertainment, I want to scream.

I’ve learned, from my seven years visiting hospice patients at this nursing home, that an institution’s appearance doesn’t reflect the warmth, caring, and expertise that the residents experience. The staff – many certified nursing assistants, RNs a rarity – are so dedicated that one I met even took a 103-year-old woman home with her for her final months. The soon-to-be-gone Glendale Home may look like a falling apart mausoleum, but inside, it‘s a community. And it’s full of stories, behind the tired faces of the residents, waiting for someone to come by and ask them about themselves. I’m glad that a new community that will include an affordable assisted living facility will replace the sad, outdated, yet in its own way wonderful Glendale.

Ruth had a good death. She came onto the care of Community Hospice in Schenectady right after her diagnosis. Most cancer patients come to us near the end, at least in some cases because their health care providers regard hospice as a sign of professional failure. My first few patients fit this mold – I didn’t visit them long enough to know them.

Asking hospice to help isn’t giving up – it is choosing to die with dignity. And Ruth Wallace, still beautiful when I last saw her yesterday, certainly did that.

Ricki,
That was beautiful..Ruth looked forward to your visits...it was an honor to know her, she gave us all much more than we gave her.
Karen Marsh

Yes, she was wonderful. I hope that physicians read the post and suggest hospice earlier, and that anyone who listened to Sarah Palin yammer on about death panels realize she had no idea what she was talking about. Thanks for commenting!